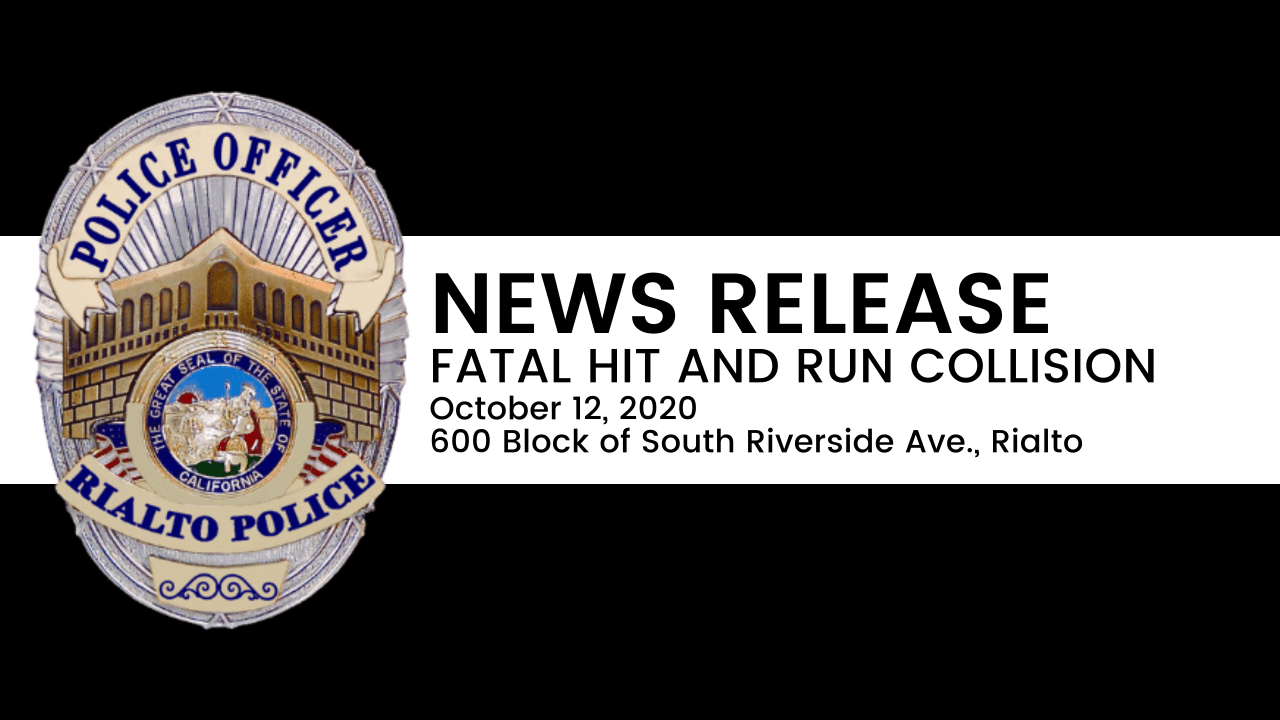 After disseminating a photograph of the suspect’s vehicle to various social medial platforms, the Rialto Police Department received a tip leading officers to the suspect’s residence. On October 14, 2020, at about 5:30 p.m., officers from the Rialto Police Department responded to the 1100 block of South Riverside Avenue in the City of Rialto. There, officers located both the vehicle used in the crime and Gomez-Blake at the location. Gomez-Blake was arrested without incident and booked into the West Valley Detention Center for Hit and Run. He is currently being held on a $50,000 bail.

The Rialto Police Department is providing a photograph of the suspect to the public so anyone who recognizes Gomez-Blake and has information related to this incident will call the Traffic Division at (909) 421-4981. Witnesses can also anonymously report information through WeTip at (800) 782-7463, reference case #932008234.

On Monday, October 12, 2020, at about 10:22 p.m., the Rialto Police Department received several 9-1-1 calls reporting that a vehicle struck a pedestrian in the area of Riverside Ave., south of Merrill Ave. in the City of Rialto. Officers responded to the scene and located a gravely injured and unresponsive male lying in the roadway. Paramedics from the Rialto Fire Department arrived and the victim succumbed to his injuries. The victim’s name is being withheld due to a pending family notification. The Body has been transported to the San Bernardino County Coroner’s Office, where next of kin notification will be made.

The Rialto Police Department’s Major Accident Investigation Team is conducting the investigation. Through vehicle debris evidence, witness statements and a photograph, investigators have concluded that the male pedestrian was crossing westbound from the east sidewalk of Riverside Ave. toward the center median. Once at the median, the victim continued walking westbound and into the path of a Toyota Tacoma pickup truck, which was traveling southbound in the #1 lane of Riverside Ave. The Toyota Tacoma’s front left quarter panel area struck the victim.

The suspect vehicle is described as a silver or gray, 2001-2004 Toyota Tacoma 4-door pickup truck with a color-matched camper shell. During the collision, the Toyota Tacoma sustained damage to the driver’s side headlight, grill and hood areas and is currently missing its driver’s side parking light assembly.

The Rialto Police Department is providing a photograph of the suspect’s vehicle and requests that anyone who may have information related to this incident call the Traffic Division at (909) 421-4981. Witnesses can also anonymously report information through WeTip at (800) 782-7463, reference case #932008234.